One can only hope

My dear, sweet imaginary friends, thank you for tolerating my unexplained absence.  I have no good explanation to offer up to you now only the hope that absence does make the heart grow fonder and a promise to try to do better.  My writing muscle is long overdue for some exercise.

I am deeply troubled by this

Because live birds can be a lot of work. Dear God!

What is our innocence,

what is our guilt? All are

naked, none is safe. And whence

is courage: the unanswered question,

in misfortune, even death,

and in it’s defeat, stirs

the soul to be strong? He

sees deep and is glad, who

and in his imprisonment rises

the sea in a chasm, struggling to be

free and unable to be,

So he who strongly feels,

grown taller as he sings, steels

his form straight up. Though he is captive,

says, satisfaction is a lowly

thing, how pure a thing is joy.

The Story of FunkDog

Some guy-type buddies of my youth lived for a time in a veritable garden spot that they lovingly, if misguidedly, referred to as The Ranch. If you’ve ever been to the South and taken a drive down a country road, you’d have spied out in the middle of a field an old abandoned shack. This place was an absolute hovel. I have no idea if they even paid rent; there’s an excellent chance they were merely squatting. But it suited them just fine. They held huge wild parties, thinking themselves to be invisible out there. I guess they didn’t believe anybody would think it curious that there were a couple hundred cars parked around this shack in the middle of nowhere.

Anyway, a stranger came to their door one day.  He was singularly unattractive — very little hair covering his hideous sore-wracked skin, just generally ratty and nasty looking. But, as is often said of the unbeautiful of the world, he had a great personality. He came to be known as “FunkDog,” because he was, in fact, a dog, and he was really funky. He came around regularly, and the boys would feed him and talk to him, but no one could quite bring themselves to actually touch him. And so they started this thing of petting FunkDog with a small stick. He would come and sit at a respectful distance, I guess knowing himself to be unclean, and eagerly await being petted and scratched with his stick. That image always just made me want to bawl, and now I think I know why.

I think FunkDog being petted with his stick is a perfect metaphor for what can happen to any of us in this life if we don’t pay attention. In any area of our lives, things can go from great, to not so hot, to down righy unspeakable, and do it so gradually that we keep downshifting our expectations to correspond with our current situation. We settle for less and less and tell ourselves, “It’s not so bad,” until finally one day we wake up and we are, in effect, hairless and scabby, just hoping to get petted with a stick for a little while. You can forget what it used to feel like to feel good about life; feeling rotten — or just a low-grade funk — seems normal and therefore acceptable. I just don’t believe that any of us are meant to be petted with sticks. If some area of your life sucks — do something else. Life is too short — and too long — to spend it being miserable. Life may indeed be short, but it is, for a fact, wide. It is high time we started settling for more.

Tagged as lessons, on being particular

Physicists will tell you that the only eternal truth is entropy — left to itself, a system changes toward a condition of maximum disorder and utter chaos.  Experience tells me otherwise. Change is resisted even in the throes of chaos.  On an intellectual level, acceptance is learned. We acknowledge that things change, disappear, transform, or are lost. On an emotional and spiritual level, inertia reigns. We lament what has changed, miss what has disappeared, sentimentalize what is transformed, and grieve what is lost. Like a man who has lost a limb, the thing that is gone remains a part of you. The beat of its  phantom pulse still connects you to what was.

Some time when the river is ice ask me
mistakes I have made. Ask me whether
what I have done is my life. Others
have come in their slow way into
my thought, and some have tried to help
or to hurt: ask me what difference
their strongest love or hate has made.

I will listen to what you say.
You and I can turn and look
at the silent river and wait. We know
the current is there, hidden; and there
are comings and goings from miles away
that hold the stillness exactly before us.
What the river says, that is what I say.

Tagged as just don't call me a sissy, lessons

There was a bright, shiny toy that he had to have.  He was told that the toy was fragile — poorly made, even.  But he was undeterred.  His relentless, determined effort quickly brought him the thing he so strongly desired.  Once his, the toy was given endless hours of his attention and devotion.  He loved the toy, he said. It was his favorite and he never wanted another.

Then one day, he noticed a place where the shine had started to rub off the toy.  Once he noticed that flaw, he began to see others.  He remembered the warning about the nature of the toy.  Eventually, all he could see of the toy was its imperfections.  Even the parts that were still in their original condition seemed destined to disappoint him if continued to play with the toy.

After all, there were plenty of other toys out there.

Filed under things that suck

The courage to change the things you can

Choice of attention — to pay attention to this and ignore that — is to the inner life what choice of action is to the outer.  In both cases, a man is responsible for his choice and must accept the consequences.

A friend to us.

Filed under things that suck

Because Sometimes You Just Need to LOL – Redux

My dashboard informs me that this very early post I made to this blog gets a good bit of traffic. I don’t know if it’s the same person but it got me thinking that it’s good to have a “go to” that’s guaranteed to make you belly laugh.

I’ve had it bookmarked as “watch this when you think you’ll never laugh again” for some time now. The other night my buddy @RyanJJohn ( if you’re reading this Ryan, I hope it’s okay for me to refer to you as my buddy even though we don’t know each other IRL because you bring the happy and that makes you buddy material in my eyes) posted it to his tumblr. It had been a while since I had thought about it and longer still since I’d watched. Lately, I have been having a pretty rough go of it.  I haven’t  really felt like laughing for some time. Playing around on twitter and tumblr has mostly been that “acting as if ” stuff they beat you over the head with in early sobriety.

Anyway, I clicked the play button thinking maybe I would at least enjoy a little chuckle. Guess what? “Watch this when you think you’ll never laugh again” is still an accurate name for my bookmark.

So I’m posting this for anyone else who needs to LOL out loud and also as a thank you to my on-line friends, wherever and whoever you are.

I will not fight.
I cannot flee.

And so I flow.

The saying goes that time heals all wounds. But there are wounds that the passage of time only seems to deepen, to make more sensitive and more painful. The weakness that grows out of such a wound cultivates doubt, multiplies sorrow, and fosters a schism between belief and feeling. It increasingly becomes a matter of conscious and deliberate choice to hold on to your faith. To remember what you believe. To have hope for the things not yet seen.

I choose faith.
I remember what I believe.
I hold hope.

And so I cannot flee.
I will not fight.

(with a nod of acknowledgment to Robert Eliot)

Now my heart is shattered.

If I bowled it down the street,

Who’s to say it mattered?

If there’s one that rode away

What would I be missing?

Lips that taste of tears, they say,

Are the best for kissing.

Eyes that watch the morning star

Arms held out to darkness are

Shall I bar the strolling guest,

Bind my brow with willow,

When, they say, the empty breast

Is the softer pillow?

That a heart falls tinkling down,

Every likely lad in town

Gathers up the pieces.

If there’s one gone whistling by

Would I let it grieve me?

Let him wonder if I lie;

Let him half believe me.

Filed under things that suck, truth 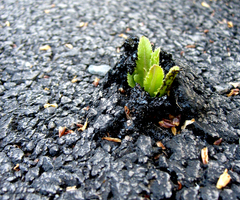 Sometimes all hope means is standing your ground when things look scariest.

Filed under truth, what matters

When you are sorrowful look again in your heart and you shall see that, in truth, you are weeping for that which has been your delight.

Filed under things that suck, truth